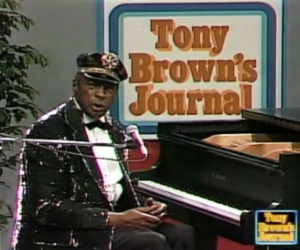 TBJ #1409 – WHERE WAS ROCK-N-ROLL 35 YEARS AGO? Many people and many styles of music influenced Rock and Roll. The styles included Blues, Jazz, Gospel, Bluegrass, Boogie-Woogie, and Rockabilly. Each was a major factor into the introduction of a new style of music called Rock ‘N’ Roll. Tony Brown, and his guest, Charles Brown, discuss the evolution of Rock-N-Roll in this 1991 Tony Brown Productions, Inc. episode.

Tony Brown’s upcoming and final book: “Walking Between The Raindrops” For info on the contents and the release date click: www.TonyBrownsJournal.com/Upcoming-Book

TBJ #2522 -- LIONEL HAMPTON: A GRACE NOTE:  Musician extraordinaire Lionel Hampton died on August 31, 2002 at the age of 94. His legacy as a musician, statesman, humanitarian and close friend of the Bush family are chronicled on this program. Tony Brown also remembers this music legend's love for the little guy.

TBJ #204 – A TRIBUTE TO EUBIE BLAKE: This is an intimate and exclusive chat with Eubie Blake.  Eubie Blake's life personifies the Black experience on Broadway, beginning with his smash hit "Shuffle Along'' in 1921 and in 1978 with a tribute to him -- "Eubie."

TBJ #1207 – “FORGOTTEN LEGENDS OF JAZZ:” Guest Donald Byrd shares with Tony Brown and a live studio audience his career in Jazz. As a sideman for many other jazz musicians of his generation, Byrd was known as one of the only bebop jazz musicians who successfully pioneered the funk and soul genres while remaining a jazz artist. As a bandleader, Byrd was an influence on the early career of Herbie Hancock. But we will always remember “Bye, Bye, Black Bird.”