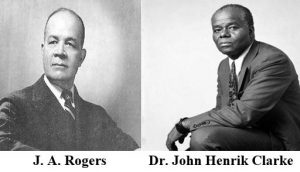 J. A. Rogers is a very diligent and prolific author of some 10 books. Among them, Sex and Race in three volumes, World's Great Men and Women of Color and Africa’s Gift To America. Rogers' books will not let us rest, nor remain comfortable with man-made racial terms. Rogers admitted, however, that to determine who was Black in America required an expert whose first qualification was to be “crazy”. His intent was to denounce the idea of race, other than, of course, the human race or human sentients. His research on known civilizations uncovered evidence of African ancestry in many a household name, which by current laws and customs would be Black or of African origin.

Rogers used history, historical events and personalities, supported by massive evidence to demonstrate the accuracy of human history, composed mainly of triumph and failure by people or members of a human race.

During an episode of Tony Brown’s Journal, in 1972, I interviewed Dr. Hollis Lynch, director of the Institute of African Studies at Columbia University in New York. I asked Dr. Lynch to give me his personal assessment of J. A. Rogers as a historian.  Dr. Lynch responded by stating that “Rogers was the most significant popular historian of Black people in his time. Unfortunately, he's been very sadly neglected by academic historians. But there is no question at all that he was a most impressive man and historian.”

“If we only knew that the world’s true early beginnings were Black History, ‘What A Wonderful World It Would Be,’ Louie Armstrong sang to us in his signature classic hit.” – Tony Brown

Who Is Tony Brown?

I am a child of the Creator of us all and a part of the ALL, the ultimate force that represents the intelligence of everything that exists as the composite force in the universe.

Some of our ancestors in ancient Alkebulan were often Ancient Masters of specialized spiritual wisdom, very unlike the religious nut jobs of both past and present, passed down our true history as a universal human race. Unfortunately, today’s race religions of militant fanaticism that have engulfed the Middle East and are infecting much of the gullible West today will not get you through the front doors or meet the higher standards of any higher plane of spiritual consciousness in our multiverse because of their complete omission of the steps necessary for the requirements of the spiritual development of humanity/evolution.

Therefore, while I am stuck on this lower plane of consciousness and I am ruled by the tribal-mindedness of its population, I must adapt and overcome these man-made shortcomings, such as a faith in mythical “races” that never existed in the first place. 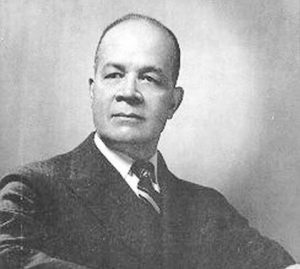 In order to do so I must first be protected by society with the necessary freedoms and belief in human rights. Therefore, I require privacy, liberty, justice and freedom of expression because, without them, I cannot advance the spiritual development that is required. The framers of the American Constitution, often largely advanced Freemasons who had studied Ancient Egyptian/African history, understood this broader concept of humanity. For proof of my assertion, just look at the US dollar and the symbols the West has adopted from African origins and you will see a symbolic prediction of America’s and civilization’s future. In fact, world civilization is a legacy of the Ancient Egyptian – African civilization. It is Africa’s Gift to the World, as J. A. Rogers taught in his famous book.

I was so impressed by that ideal that when I became financially stable and started a freedom currency (“freedoms”) of my own to encourage Blacks to circulate a larger percentage of their enormous wealth within in their own communities (currently Blacks share only about 4% of their gross income with one another), I used a picture on my Freedom Dollar of The Great Sphinx of Ghizeh to communicate what freedom meant to me and to give that ideal its true color: “The Only Color of Freedom Is Green,” I wrote in 1985. 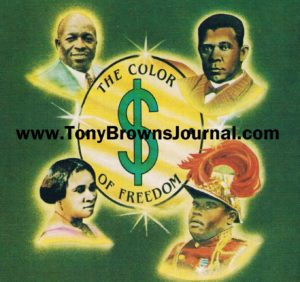 Finally, being closer to the age of 100 than I am to the age of 50, I now “realize” the inner meaning of the Sphinx: I AM, and as are all other human beings who are descended from our common Creator – of African ancestry. I am Black – of an Egyptian hue made in the image of the ALL, a Sphinx man who serves in its own light of truth.

The Sphinx is a sacred symbol and if you look deep enough, you will find your true Self. Download my FREE history/learning e-catalog (www.TonyBrownsJournal.com) and learn to become your true Self.

In legend, the Egyptian Horus taught of a symbolic rebirth in heaven. The Ancient Egyptians largely believed their ancestors were responsible for Paradise, similar to the primary “Paradise of Earth,” the original Earthly Paradise of the Christian Bible, situated in the papyrus field of reeds in the South of ancient Egypt.  There was also, according to this legend, the Heavenly Paradise (Horus, et. al.), which is represented today as a combination of Lion, Ox, Eagle and Man, which is, you guessed it, the archetype Sphinx. In the Christian version, these symbols survive as St. Matthew, St. Mark, St. Luke and St. John in that religious legend.

The Stellar Cult of the Egyptian God Horus was the first of a long line of Sun gods or Chrishnas or Saviors or Christs of the modern and ancient Middle-Eastern and Eastern religions. The proper title of such an illuminated contemporary modern god is The Christ or Chrishna. Uranographically, this archetype is the Big Bear constellation, which was first imaged as Hapi, Taumutf, Kabhsemif and Amstal, which were known later in ancient Egypt as Lion, Ox, Eagle and Man (the Sphinx). However, if you look at its genesis, its name is The Sphinx and its origin is Alkebulan, The Mother of Civilization, or Africa, as she is currently known.

“If we only knew that the world’s true early beginnings were Black History, ‘What A Wonderful World It Would Be,’ Louie Armstrong sang to us in his signature classic hit.” – Tony Brown

BLACK REALITY RATINGS   These latest numbers as of July 14, 2022 document a significant growth in the size of the audience of Tony Brown’s Journal on Facebook and it amplifies META/Facebook’s own previous citation of Tony Brown’s Journal as “one of the well-known public pages with a large following that has been verified as having an authentic identity.” Dr. Khalid Al-Mansour: Has Black Leadership Betrayed Its Own Community? During the week of July 8 – July 14, Dr. Khalid Al-Mansour asked the TonyBrownsJournal.com viewers who was responsible for the black community? This Tony Brown’s Journal blog reached 114,903 NEW VIEWS AND added 1,203 NEW SHARES (with an average of 1,500 new viewers per additional website = 1,500 x 1,203 = 1,804,500 new website viewers of TBJ).

Black College Day & The Tuskegee Airmen: TonyBrownsJournal.com revealed that in the 14 days following the “Black Royalty: The Black Princess Series,” the TBJ posts on “Black College Day" and The Tuskegee Airmen" advanced the total to another record of 221,595 new views and 1,021 new shares (with an average of 1,500 new viewers per additional website = 1,500 x 1,021 = 1,518,000 new website viewers of TBJ).