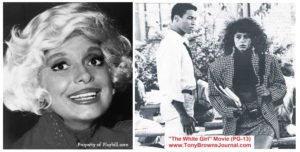 How America Avoids the subject that I tackle in “The White Girl.” I focused on this subject largely because American movies and the general public scrupulously avoids the subject. Faithfully, however, the natural laws of the cosmic multiverses, seemingly are linked to a karmic stream of consciousness in the awareness universe. In fact, it does not allow the reality of one human race to disappear from the local consciousness of humans on the Earth plane – even when governments pass laws to cancel reality. This neurosis is ubiquitous.

However, Shakespeare warned centuries ago: “This above all to thine ownself be true. For it must follow as the night the day. Tho can’st not then be false to any man.” A principled statement made by William Shakespeare that few people in today’s world can make. It took Carol Channing, actress/Broadway star (“Hello Dolly”) and 80 years before she had the courage to admit she had played a lifetime role of being White, after being told when she was 16 by her mother that she fit the official definition for “colored people.”

It was a routine role for many Black families in my hometown of Charleston, W. Va. and an epidemic even more endemic in the deep South during the formative years of my life. Entire families, including most of my own, abandoned the South to avoid what was hell on Earth behind the colorline.

Some went North and adopted White supremacy as a cover story. Others attracted the neurotic syndrome of self-hatred and believed the lie that they were not of African ancestry but were generated by some non-designated, non-scientific category of humans. They had been saved by the neurosis taught by the race god of “integration” with other humans who were “White” by the same system of generation of the species.

Most African Americans, somehow, by parental love, environmental intervention or some other form of other-worldly influence, sublimated the self-destructive pattern of personality development into a blueprint for wholesome mental health that eluded the neurotic and psychotic behavior of the ruling caste of America, which includes its share of default African Americans who unfortunately love to hate themselves.

That is the history of assimilation in America, the denial of reality.

In 2002, Carol Channing, the star-legend of stage and film, told CNN’s Larry King in an interview:

CHANNING: So, all I can do is tell the whole truth as it happened.

KING: As you perceived it.

CHANNING: As I perceive it and as it happened to me and let the reader decide whether I'm lying.

KING: Lets start early in that truth. Your father was black.

KING: No, it says in my notes your beloved father, George Channing, a newspaper editor, renowned Christian Science lecturer listed as colored on his birth certificate.

CHANNING: Yes, and the place burned down, but nobody ever knew that. But I know it. Every time I start to sing or dance, I know it, and I'm proud of it.

KING: So he was black?

CHANNING: No, He had in -- there was a picture in our family album and my grandmother said -- I never saw them. My grandfather was Nordic German and my grandmother was in the dark. And they said no that was -- she was -- and I'm so proud of it I can't tell you. When our champion gave me that last third (UNINTELLIGIBLE) on "Hello Dolly!" Again. No white woman can do it like I did.

KING: So you're proud of your mixed heritage?

CHANNING: Very, when I found out. I was 16-years-old and my mother told me. And you know, only the reaction on me was, Gee, I got the greatest genes in show business.

KING: Some people years ago discovering that might have been disturbed by it?

CHANNING: Yes, years ago because when I found out about it, you don't want to do that.

CHANNING: You don't say it. There's a lot of it down South.

KING: People are ashamed of it.

CHANNING: I'd proud of it.

CHANNING: I really am. I mean look, what makes you, you? You don't know. None of us knows our heritage. Not in the United States. 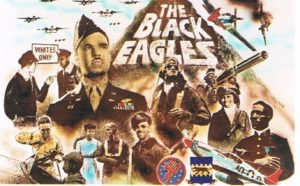 Criticism of the 99th's overseas combat record was instantaneous and virulent.  After only a few months in combat. the Commander of the 12th Air Support Command assailed the performance of the  Black pilots. “Officers of all professions."  he said, felt that "the Negro type has not the proper reflexes to make a first-class fighter pilot:'

He was joined by the Group Commander of the 33rd Fighter Group; under which the 99th entered combat: "Based on the performance...it is my opinion that they are not of the fighting caliber of any squadron in this Group:' Time magazine questioned the 99th's performance and asked: "Experiment Proved?"

After a stateside controversy and a Senate hearing, the experiment was given additional time-but on a larger scale. The all-Black 332nd Fighter Group was sent overseas also. The pressure to succeed had become   enormous and the implication very obvious: The performance of the 99th and the 332nd in combat would determine the future role of Blacks in the military. "The Enemy Within" was still there.

Let TonyBrownsJournal.com do the teaching with the nearly 1,000 streamed videos into your home, your office or on your mobile device for a true Black history education.  Fill the vacuum created by a national ignorance of African-American history and culture by subscribing to this streamed collection of nearly 1,000 historic video titles.

As a university dean emeritus of a journalism school, I consider this historic collection to be the equivalent of an academic Ph. D. degree in Black History and Black Affairs. You can also subscribe to the Tony Brown’s Journal Video and Film collection (www.TonyBrownsJournal.com/subscribe) that has been described by one archivist as “the most complete and thoughtful record of African-American opinion.”