How Black Music Made American Music

The music of the Black religious experience is the primary root of all music born in the United States. It is an understatement to note that there is little public awareness of the crucial role of Black sacred music in the development of the broad variety of American popular music. On the strength of this fact alone, its preservation and respect should be guaranteed. 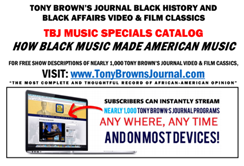 FREE CATALOG Tony Brown’s Journal Music Specials Let TonyBrownsJournal.com do the teaching with streamed videos into your home, your office or on your mobile device.

www.TonyBrownsJournal.com/Upcoming-Book to be placed on a list to be notified of my upcoming book’s release date.

However, there is greater significance to the fact that the music of Black religious life serves as an indispensable support system for the establishment, growth and continuity of the Black Church, the institution of dominant influence in the life experience of Black Americans in the United States.

Black sacred music began, grew, developed, and expanded in the “invisible church” of the antebellum slave society. This disclaimer is crucial in order to understand that those of the slave community came by the influence of the Watts hymns while they were developing their own music.  The slaves’ use and development of the Spiritual form provided the New World Africans’ unique imprint on the meter music that cans to ascendance in the latter days of slavery.

The Spirituals are the heart music of all other American music. They are the taproot of the musical expression of the Black religious experience. Some specialists dicker about the accuracy of calling the music spawned in pre-Civil War says “Spirituals.”

Without The Black Church, Black America would not have had a prayer! There is no music more beautiful, more compelling, more American than Black Sacred Music. It is the soul of the Black Church and the Black Church is the foundation of the Black Community.  Our Thank God 4-part series started out in our conscious minds as a documentary on the African oral tradition which manifested on these shores largely as America's indigenous music.  But how do you verbally tell a story of songs? You don't, we soon learned. As our scenes unfolded and our research progressed, there was more and more music. And, I might add, it sounded better and better. We soon learned how the African slaves, our ancestors, learned to sing the Lord's song in a strange land. During the production of this original TBJ docudrama, we also learned from the experience of our ancestors that we had produced an Afro-American Docu-Opera.  Get your copy today.

In Somebody’s Calling My Name, Dr. Wyatt Tee Walker has meet a long-standing need by making available the history of Black people in America in terms of their music. Others have suggested this relationship, but memory does not recall anyone who has presented the music of American Black people as a clue to their history, or vice versa, with the thoroughness which marks Somebody’s Calling My Name.

Dr. Walker brings to his task an almost incomparably broad and varied background and talents every bit as diverse and rich as have been his experiences. He was a crucial part of Dr. Martin Luther King’s crusade for freedom; he was a successful pastor, a preacher of notable endowments, and enjoys a talent for singing with mover power the songs of hope and sorrow about which he writes so engagingly in his book “Somebody’s Calling My Name.”

One will not soon forget his meticulous tracing of the “roots” in Africa of American Black music.

As a whole volume suggests, we have in the interpretation which slaves and their children gave to Christian faith a modern “glossolalia,” where the masters said the Bible declared one thing and the slaves heard something far different about what the Bible declared. The owners spoke of slavery being “God-ordained”; the slaves heard, “Before I’d be a slave, I’d be buried in my grave.”

Nothing has been said here of the felicity of language, the thorough documentation, the invaluable bibliography of this book. Much ought to be said of these things, since Dr. Walker has presented in these pages a rare treasury of history and reflection and he has done it with honesty and grace, which are not often seen in happy alliance.