Give Yourself Black History — Every Month 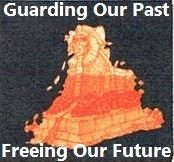 Guarding Our Past
Freeing Our Future

WED., FEB. 27 – TBJ #2614 – “God Is Ahead By 13 Percent:” In 2003, sales for gospel music had grown by 13 percent while they dropped by 24 percent for the Hip Hop genre and other popular music forms.  Vicki Mack Lataillade, president of Gospo Centric Records, founded her company with a $6,000 loan.  Gospo Centric Records featured big name stars such as Kirk Franklin and Kurt Carr.

THURS., FEB. 28 – TBJ #2726 – “Martha Reeves In A New Galaxy:” With signature songs like “Dancing in the Street,” “Jimmy Mack” and “Heat Wave,” Martha Reeves was one of Motown’s singing icons at the peak of her career.  Reeves talks about how her life and her music changed over the decades, and how she influenced many in the world’s aspiring performers.

FRI., MARCH 1 – TBJ #2122 – “MUSIC LEGENDS:” This edition features the thoughts and music of some of the world’s most talented legendary entertainers, including Eubie Blake, Chuck Jackson, Stevie Wonder, Lionel Hampton and Charles Brown.

MON. MAR. 4 – TBJ #631 – “Mrs. Norman, We Love You:” Garnet High School in Charleston, WV was Tony Brown’s high school. It was one of the most academically rigorous high schools in the nation and, as a result, in 1951, his freshman entrance exam to Wayne State University in Detroit was waived because of Garnet’s outstanding academic record. The fact that Garnet was all-Black because of some state laws in the U. S. that, ironically, resulted in an all-Black faculty. As a result, some of these Black Garnet scholars gained advanced Ph. D. degrees from prestigious European universities such as The Sorbonne in Paris and many of the most distinguished White universities in the U. S. On this edition, Brown’s English teacher, Ruth S. Norman, and the all-Black school’s standard of academic excellence and character building are profiled. Garnet High School was named after Henry Highland Garnett, a militant former slave from the Mandingo tribe in Africa and later Jamaica. 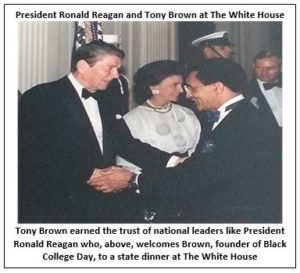 TUES., MAR. 5 – TBJ #601 – “When The Sisters Came Marching Home:” After this profile on the 6888 Black WAC unit was aired, Tony Brown appealed to the Ronald Reagan White House (a supporter of the Tony Brown-sponsored first annual Black College Day in 1983) to honor the WWII Black WAC unit: “This superb group of women was the only Black WAC unit to serve overseas during WWII. They were cited for doing a job that no one else had succeeded in doing. The 6888th also holds the dubious distinction of being the only all-female unit to serve overseas which did not receive a citation.”