Tony Brown returns to the education arena as consultant and spokesperson for a soon-to-be-released 2019 version of a video game-based English Grammar Learning System. FOR INFO, CLICK HERE: www.TonyBrownsJournal.com/EGLS 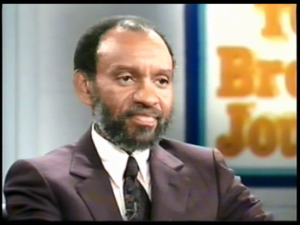 MON., NOV. 19 – TBJ #2405 -- ORIGINS – PART 1:  Khalid Al-Mansour, dynamic author of numerous books on Black history and culture, discusses the origin and achievements of the Black African Diaspora.   Dr. Al-Mansour traces what he calls an illustrious history that has been buried throughout the ages.

TUES., NOV. 20 – TBJ #2406 – SLAVE VALUES – PART 2: Dr. Khalid Al-Mansour continues his discussion of Black history and culture.  He details the effects of “slave values” on the African-American psyche and says that this slave mentality is the central crippling force in the African-American community. The presence of Islam in Africa is also examined.

WED., NOV. 21 – TBJ #323 -- GREAT BLACK MEN OF COLOR:  J.A. Rogers spent the majority of his lifetime pioneering the field of Black studies with his exhaustive research on the major names in Black history whose contributions or even very existence have been glossed over. Dr. John Henrik Clark discusses Rogers’ book “Great Black Men of Color” and other important and historical work by Rogers.

THURS., NOV. 22 – TBJ #622 – WHO WAS MEDGAR EVERS?: In the early 1950s times were hard for many Black Americans in the old South. Rigid segregation was the rule of the day and African Americans found themselves on the periphery of American life. But even before the birth of the modern civil rights movement, one Black man declared non-violent warfare on the old Jim Crow system. However, Medgar Evers became one of the many casualties of the civil rights struggle.

FRI., NOV. 23 – TBJ #2201 – “IN THE WORDS OF FREDERICK DOUGLASS”:  In the 1960s, Rev. Martin Luther King, Jr. was the premier spokesman for the Black community, articulating the struggle for freedom and equality.  Rev. King carried on the tradition of another eloquent voice for Black progress and equality, Frederick Douglass.  This edition relives the Black struggle to achieve the American dream in pictures and dramatic reenactments.