After 35 Years, Racial Gaps Widen At 100 US Colleges. Study proves that Blacks were not mentally inferior in the first place. Blacks need enough Black History to develop confidence in themselves to excel. Reports suggests that racial diversity is good, but not a requirement for Blacks to learn.

“Even after decades of affirmative action, black and Hispanic students are more underrepresented at the nation’s top colleges and universities than they were 35 years ago,” according to a page one New York Times analysis on August 25, 2017.

“The share of black freshmen at elite schools is virtually unchanged since 1980. Black students are just 6 percent of freshmen but 15 percent of college-age Americans.

“More Hispanics are attending elite schools, but the increase has not kept up with the huge growth of young Hispanics in the United States, so the gap between students and the college-age population has widened,” as reported in The New York Times. (“Affirmative Action Yields Little Progress on Campus for Blacks and Hispanics,” by Jeremy Askhens, NYT, p. 1, 8/25/17)

As the former Dean and the Dean Emeritus of the Scripps Howard School of Journalism and Communications at Hampton University, I required and demanded a standard of excellence in teaching and academic performance and I did not let ethnicity or ancestral background influence my opinion of the potential of any student. The true enemy is the bigotry of low expectations. Unfortunately, low expectations and Blacks have become synonymous. That development is even more ominous because the bigotry of low expectations and mediocrity adversely impact Black overachievers as well. That's why the gold standard will always be excellence. 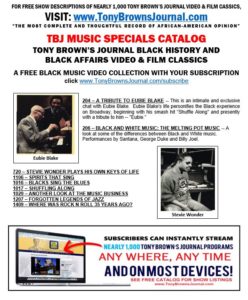 Test Scores Improved 31%  If Blacks are to close the academic performance gap, they can benefit from my experience. I introduced a grammar and punctuation learning system into the curriculum at the predominately African-American Scripps Howard School of Journalism and Communications at Hampton University. In just a short time, student grammar test scores increased by 31%. As a result of our focus on being a writing school, the Scripps Howard School became a rare national example of diversity that was achieved through academic excellence in journalism.

A Competitive Journalism Program This fact gradually became self-evident within the field of journalism and was acknowledged, as well. For example, in 2008, The New York Times selected 18 college journalism students from across the country for its widely-recognized and much sought-after summer internship class that year. But unlike any previous year, the most prestigious newspaper in the nation picked three students from the same journalism and communications school: Scripps Howard at Hampton University. What was even more astonishing is the racial/demographic composition of the almost 100% African-American student universe of the winning Scripps Howard School and a significant breakthrough for African Americans in higher education. That’s also when, shortly afterwards, that three journalism majors at the Scripps Howard School of Journalism and Communications at Hampton University made history.

Particularly Impressive “In any given summer, it hasn’t been all that uncommon to have two interns from the same school – for example, this year we’ll have two each from Syracuse, Columbia and Harvard – but I don’t recall ever having three from the same school,” Sheila Rule, a Times senior editor, told an Internet source. "Congrats to you and everyone at Hampton for placing all the summer interns at The Times," said Don Hecker, Director of The New York Times Student Journalism Institute. "It's quite an accolade. Forget whether it's a record for an HBCU (Historically Black Colleges and Universities), it's probably a record for any school, including the traditional heavyweights like Harvard, Yale and the big schools with long-recognized journalism programs. And particularly impressive because we have one of the smallest internship programs among the big papers."

As a veteran journalist and educator, who was also the founding dean of the outstanding Howard University School of Communications, I attribute this competitive academic success at Hampton mainly to Hampton’s emphasis on grammar knowledge, writing skills and a focus on diversity through excellence.