America’s Top States With The Lowest & Highest Cost of Living

The truth, also according to Tony Brown, is that “the lack of knowledge of  living is the cause of ignorance and ignorance is the cause of the death of the body,” permits  the search for truth to continue on an appropriate level in the spirit world.

That’s why, without so-called death, there would be no life or a gate to potential eternal happiness. The rest of my theory for mortal spiritual development into an ultimate reality will be explained in detail in a chapter in my final upcoming book, “Walking Between The Raindrops.”

Info On My Upcoming Book: "Walking Between The Raindrops"

For example, The Big Bang Explosion may be the ultimate scientific explanation of the generation of Earth life approximately 13.7 billion years ago and the scientific manifestation of the cosmological birth of human life on the earth plane as a sub-atomic boson particle. Hence, a collective of subatomic particles were ultimately transformed into a boson cosmic soup that subsequently evolved into human life centuries later. Thus, what we call BIRTH may be the transformation of eternal human beings from a cosmic substance 5,500 years ago into a specific immaterial (invisible) vibrating wave system of energy on the earth plane, beginning in water.

What we call DEATH just might be the transition of this immaterial and indestructible energy wave and its “genie” cosmic essence into the physical world as matter (the human body on this material plane). We will all find out for sure at another time. In the meantime, we just found out that where we live in the U. S. has more influence on our financial journey than we may suspect. 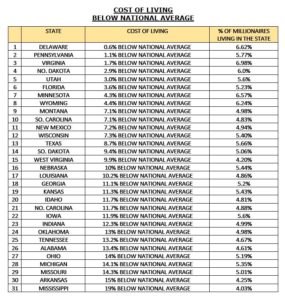 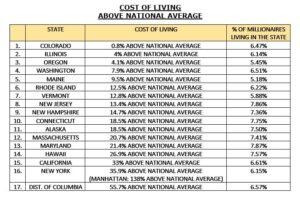