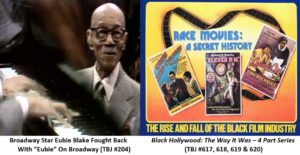 THE PERSISTENCE OF BLACKFACE ... As recent as 2019, the odious practice was allegedly resurrected by the governor of Virginia, Ralph Northam, who ignored and denied the recorded history of the American Slave Trade in his own state of the visible evidence of a nasty assault on the minds and bodies of my ancestors from Africa with flimsy evasions of the reality of America’s past history. Fast forward to 1979.

During a 1979 intimate and exclusive chat with Eubie Blake (TBJ #204 – A Tribute To Eubie Blake), he shares a back-and-forth banter he had with a Maryland nightclub owner and his “makeup:”

CLUB OWNER: When are you going to makeup?

EUBIE BLAKE: I don’t wear no makeup. (I know what he’s talking about.)

CLUB OWNER: What do you mean “makeup?” When are you going to put “cork” on?

EUBIE BLAKE:  I was born with “cork” on. Why am I going to pay for what I already got?

As part of the U. S. film industry's early beginnings, the “burnt cork” imagery was either portrayed in a clown-like manner by Whites smeared with “burnt cork” or acted out by Black actors who were coerced to play demeaning roles. Subsequently, the exclusion from legitimate cinema prompted Blacks to independently produce their own films. The first episode of this fantastic glimpse into the archives of the motion picture industry, "Burnt Cork," on the Tony Brown’s Journal television series (www.TonyBrownsJournal.com) journeys back to the beginning of this racist practice with the invention of the first moving picture and follows the impact of African Americans like Oscar Micheaux, from South Dakota.

Ever since the first official public screening of a motion picture took place in America in 1896, the African-American presence can be found in the film industry. Between 1910 and 1950, there were approximately 150 independent film companies organized to produce Black-cast movies; thirty-four percent of these companies were owned by African Americans.

"Black participation in the business of motion picture production and distribution began in Chicago, Illinois in 1910 when William Foster produced the first of a series of   Black-cast comedies," says Dr. Henry T. Sampson, author of “Blacks in Black and White: A Source Book on Black Films” (The Scarecrow Press), and a guest on the “Tony Brown’s Journal” four-part TV program “Black Hollywood: The Way It Was.” Also included on this four-part series documenting the history of Blacks in film (Click here: www.TonyBrownsJournal.com) will be Dr. Thomas Cripps, author of “Slow Fade To Black” (Oxford University Press) and “Black Film As Genre” (Indiana University Press).

Although Foster's contributions were highly significant, America's perception of these African-descended people as submissive, child-like characters or a stupid buffoon prevailed in films. Five years after William Foster made the first Black-produced film, the industry was thrust into a new era when a White filmmaker named D.W. Griffith produced "The Birth of a Nation." Griffith's sentimental three-hour adaptation of the pre-Civil War South revolutionized the industry; at the same time, it glorified the KKK and became a landmark epic of racial hatred.

This signature of cinematic White racism not only ignited the Black community to protest, but it also had a profound impact on the entire American society that helped create a standard by which all films – and Blacks – would be judged for decades to come. Over generations, “Birth” helped breathe hatred into the consciousness of a nation and helped institutionalize a White supremacy philosophy in some American psyches.