The Washington Post Was First To Report The Story.  Hillary Clinton's Watergate Event.  A story by Eli Watkins, Dan Merica and Katelyn Polantz of CNN reported that Hillary Clinton's presidential campaign and the Democratic National Committee helped fund research that led to the now-infamous and inaccurate dossier of allegations about President Donald Trump and Russia, a source familiar with the matter told CNN.

The source said the law firm Perkins Coie, as part of its representation of the Clinton campaign and the DNC, retained the intelligence firm Fusion GPS and entered "into an engagement for research services that began in April 2016 and concluded before the election in early November."

The newspaper, citing people familiar with the matter, said a lawyer representing the Clinton campaign and the DNC hired Fusion GPS, which in turn hired former British intelligence officer Christopher Steele, whose research makes up the document. The Post said Perkins Coie lawyer Marc Elias retained the research firm in April 2016 as the GOP primary was winding down and Trump was increasingly likely to clinch his party's nomination.

Let TonyBrownsJournal.com do the teaching with 1,000 streamed videos into your home, your office or onto your mobile device for a true Black history education.

"The real Russia scandal? Clinton campaign paid for the fake Russia dossier, then lied about it & covered it up," Sanders tweeted.  The confirmation that the Democratic Party and the Clinton campaign contributed funding that led to the dossier comes as Trump continues to train his fire on the explosive document, most recently tweeting, "Workers of firm involved with the discredited and Fake Dossier take the 5th. Who paid for it, Russia, the FBI or the Dems (or all)?"

Adam Entous, Devlin Barrett and Rosalind S. Helderman reported in the Washington Post (“Clinton Campaign, DNC Paid For Research That Led To Russia Dossier”) on 10-25-17 that the Hillary Clinton campaign and the Democratic National Committee helped fund research that resulted in a now-famous dossier containing allegations about President Trump’s connections to Russia and possible coordination between his campaign and the Kremlin. 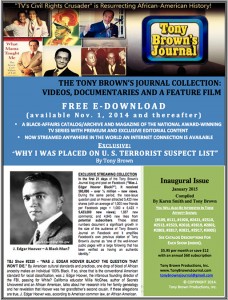 GET YOUR FREE COPY

Fusion GPS gave Steele’s reports and other research documents to Elias, the people familiar with the matter said. It is unclear how or how much of that information was shared with the campaign and the DNC and who in those organizations was aware of the roles of Fusion GPS and Steele. One person close to the matter said the campaign and the DNC were not informed by the law firm of Fusion GPS’s role.

The dossier has become a lightning rod amid the intensifying investigations into the Trump campaign’s possible connections to Russia. Some congressional Republican leaders have spent months trying to discredit Fusion GPS and Steele and tried to determine the identity of the Democrat or organization that paid for the dossier.

President Trump tweeted as recently as Saturday that the Justice Department and FBI should “immediately release who paid for it.”