Donald Trump Wants A Deal With Black America. Here’s One He Can’t Refuse. 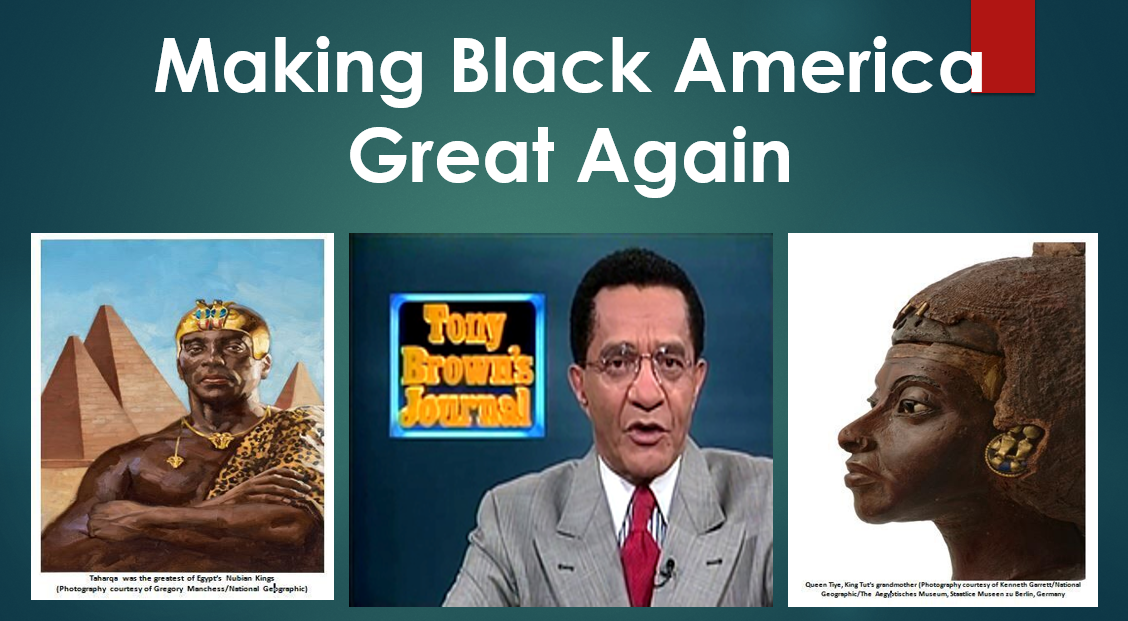 Everyone and everything began at the point of its origin/ancestry, ancient Alkebulan (now called Africa), which is “officially The Cradle of Civilization and The Mother of All Mankind.” The growth period of this life ellipse is eternal and its source is love, the biggest word in the dictionary and the goal of life, I believe. As I write, I have in mind both Ancient Masters who graduated into wisdom and a deeper knowledge of the inner meanings of the Black ancestor’s conquest of Ancient Egypt and Ethiopia.

After all, human life and ancient civilization began in the deeper regions of ancient Alkebulan. This historical fact gives insight into my adaptation of Donald Trump’s political campaign (“Make America Great Again”) and makes that hidden history relevant to the African-American self-empowerment Blacks, by utilizing TonyBrownsJournal.com to do the teaching with 1,000 historic streamed videos in your home, your office or on your mobile device for a true Black history education. For more information, click here: www.tonybrownsjournal.com/homeschooling.

DEMOCRATS CANNOT WIN PRESIDENCY UNLESS THEY TAKE AT LEAST  90% OF THE BLACK VOTE. Why Blacks Should Hold Republicans and Democrats To An Objective Standard That Makes Both Parties Pay For Support That Blacks Now Freely Give Away

AN OPEN LETTER TO  DONALD TRUMP. The New Game: "The Art Of The Deal"   After reminding his national television audience earlier this week that 58% of young Blacks were currently unemployed, Donald Trump promised Blacks that, if they voted for him, he would deliver an “amazing” return to the Black community for its support. That’s a departure in the national political discourse because the usual dialogue centers on the principles of what is good for America, according to the Democrat or Republican orthodoxy of faith.

Blacks like me who believe in quid pro quo (something-for-something) politics see no advantage to surrendering valuable votes for empty promises, especially from dishonest politicians who seem to enjoy the sociopathic trait of lying. Therefore, let’s make it real if we make a deal: If you do something for my people, I will do something for you, but what you do must be tangible, not just rhetorical political promises. I want Mr. Trump to help Black America make Black great again, as he produces a self-empowerment program built around the development of technology job skills, business and financial development and free-market uses of Black consumer income to supplement business development and job growth in the national Black community.

To that end, I am going to reach out to my old friend Newt Gingrich who was the Speaker of the House and leader of the Republican Caucus, circa 1995, who offered me much sage advice and mentored me during my brief active period in the Republican Party, to relay the contents of this blog essay to the current Republican standard bearer, Donald Trump. “Tony Brown is a genuine historic figure – and he is going to continue to make history.”  That’s what Newt Gingrich wrote on the jacket of my first book, “Black Lies, White Lies: The Truth According To Tony Brown” in 1995.  I have frequently been called an “out-of-the-box thinker” during my active journalism years, but I am still working on the “historic figure” part – which leads me to the current issue at hand – the self-empowerment of African Americans and how to achieve it.

Now that presidential candidate, Donald Trump, has been pulled into the gravitational cycle of the Black community’s struggle, the Newt Gingrich description of my historical placement must be understood in a broader perspective. For my sake and the sake of all African Americans – and all Americans – I hope that Newt Gingrich, now a leading Trump adviser, still feels the same way and that he will use his sage advice to convince Mr. Trump to take a leading role in adopting my new suggested proposal to help Black America empower itself as a productive unit and play a unified role in our nation’s progress, so African Americans can return to their former ancestral status as a great people. His task is simple: Do for Black-American communities what he has already done for American cities – build them into a viable social, economic and literate mecca as the example of what a hopeful future the nation can expect.

Has Black America Been Betrayed By Its Leadership?

When I wrote my first book “Black Lies, White Lies: The Truth According To Tony Brown,” in 1995, I had some knowledge of how to make money as an entrepreneur and marketer, but virtually no knowledge of the uses of money. This week’s blog essay attempts to close my learning gap somewhat using Donald Trump’s recent public offer to harness the Black vote he is currently losing to Hillary Clinton by 95%.

Since Mr. Trump promoted the idea that he was interested in reaching out to the Black community, I thought this would be an opportune time to help him help Black people. I am prepared to offer him my assistance as a payback for what President Ronald did for Black colleges in 1980, at my urging. Self-empowerment worked then and it will work again -- because of the natural Law of Cause and Effect.

In this week’s blog essay, I am challenging a proven champion of finance and entrepreneurship, Donald Trump, to accept my self-empowerment model for rebuilding the Black community as a part of his plan to Make America Great Again. I go so far as to say that his plan cannot Make America Great Again unless he includes my “Make Black America Work” plan that I proposed in 1995, 16 years ago, in Chapter 12 of my first book (“If I Were President How I Would Make America Work For U. S.”).  That same self-empowerment model that had already saved Black Colleges in 1980 could be adapted to incentivize Trump's model as a personal benefit for the participants.

In absolute disclosure, let me admit that my outline was amateurish and incomplete and contained nothing that rivaled Mr. Trump’s recent economic proposal to Make America Great Again. But I did succeed in achieving a more relevant meaning for Black people with the contents of that incomplete plan. I am so confident of the potential of this idea that I am suggesting it to Donald Trump and his team as a working outline for a deal with Black America that can achieve in a more efficient manner, what I first published in 1995, long before Donald Trump became a politician.

My interest is in providing skills and business opportunities for people who are willing to work and take advantage of opportunities, not the something-for-nothing variety.

The best example of Black self-empowerment that I have ever been involved in was Black College Day, a national rally that I organized in 1980 to stop the White liberal Legal Defense Fund, spearheaded by a Democrat Party-inspired strategy to exploit the concept of “integration” of the nation’s public Black colleges and universities.

My gratitude goes out to President Ronald Reagan for giving me the opportunity to help my people and simultaneously serve my country. Let us hope that Donald Trump shows the same respect for Black self-empowerment that President Ronald Reagan did in 1980. I seek no financial compensation or appointment for my services and I neither sought nor received same from President Reagan in 1980 when I sponsored Black College Day, a non-partisan event to keep both the liberal racists and the conservative racists, Black and White, from closing Black colleges.

If the new Republican leader is sincere about his offer of mutual respect for African Americans and all peoples, I am prepared to meet him half-way to deal with Blacks as equal Americans. I am tempted to offer a quid pro quo deal that he can’t refuse – similar to the one I made with President Ronald Reagan in 1980 that saved Black colleges (visit www.tonybrownsjournal.com/video-catalog and read pages 27-34 of my May 2015 catalog for details).

Because the Republican Party was, at that time, in my opinion, outwardly contemptuous of Black self-empowerment, I retreated from an active and prominent role, including voting. Until now, I saw no viable political alternative. But now, I philosophically embrace the role of an Independent Republican who is committed to a free-market system and a Republic form of government – for all citizens.

I want to thank Donald Trump, warts and all, for re-opening the door that makes this long-overdue conversation possible with his challenge to the Republican conservative authoritarian regime to reform it as a Republican Party of the People.

Second, I encourage Black people to consider his nationalistic call to Make America Great Again. However, we must be mindful that the greatness of America cannot be accomplished without making Blacks great again.

Finally, this goal can only be accomplished through a pragmatic deal or recognition of interests between the aggrieved and the favored classes. In other words, “Let’s Make A Deal” for fairness and justice based on performance and excellence.