Female Olympic Athletes Lift Image Of All Women As Leaders 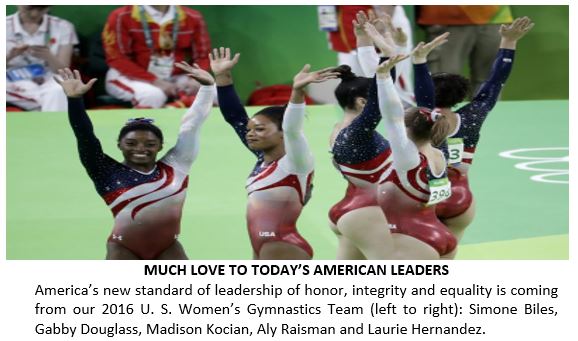 Why Won’t U. S. Government Use Black Economic Power To Win International Struggle The Way The U. S. Unleashed The Power OF Black Women To Dominate the 2016 Olympics?

Let TonyBrownsJournal.com do the teaching with streamed videos in your home, your office or on your mobile device for a true Black history education. For more information click here: www.tonybrownsjournal.com/homeschooling.

Gen. Daniel “Chappie” James, a Tuskegee graduate and leader in the all-Black WWII 477th Bombardment Group, who was also the first Black to receive the rank of Four-Star General in military history, must have been smiling as he looked down from a heavenly plane of wisdom and saw a truly United States of the American Republic and the hearts and minds of the world applauding a group of American women at the world Olympics competition earlier this week. In an eerie coincidence, the Tuskegee Airman and Korean War jet fighter-pilot ace was simply reiterating the sage advice he had received from his Black Mama in Pensacola, Florida as a young boy.

“Don’t stand there banging on that door of opportunity, yelling, ‘Let me in, let me in.’ Then, all of a sudden, someone snatches open the door and you say, wait a minute, I have to go and pack my bags. Instead, you stand there armed with your bags of knowledge and your bags of understanding and your bags of desire, and when they crack that door, step in and take charge.”

Obviously, the two Black members of the “Fabulous Five,” as I choose to call those new Stars in the Olympic Galaxy, got the same message of self-empowerment from their ancestral heritage and history as Black women. It is a legacy that has been long scorned and devalued by White supremacy and some Blacks themselves, but preserved by the necessity of recognizing excellence and unity as key components of our survival as a nation.

The gymnastics team dominated, largely because of five magnificent, beautiful and courageous young women. Their huge margin of victory was possible because of their intense desire, rare talent and unifying purpose. 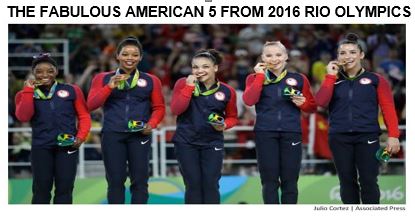 They -- Aly Raisman, Gabby Douglas, Madison Kocian, Laurie Hernandez and Simone Biles – literally conquered the world, not just all of sports. The U. S. conquered not only the Olympics in Rio De Janerio, Brazil, but the hearts and minds of every precinct in every population on the globe – with a team success that had never been seen in a racially-divided U. S. or anywhere in the world. 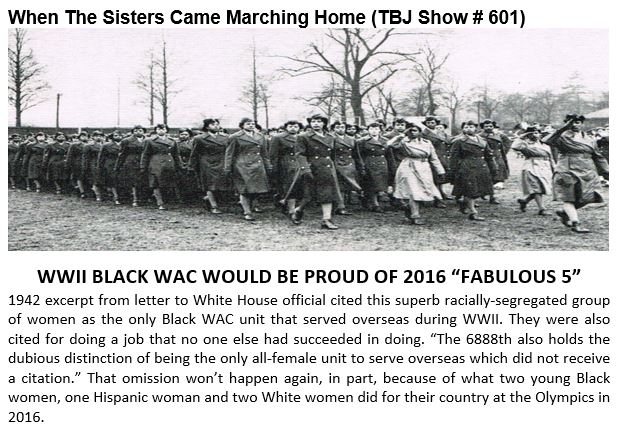 Fortunately, these young women provided the kind and quality of character that is so apparently missing from the American political class where you would expect to find it.  The excellence of the “Fab 5” makes you love them, whatever their skin color. Compare the honor and trustworthiness of these young women to the Pentagon’s Central Command’s “toxic” leadership when falsely reporting that ISIS terrorists pose only a minor military threat to U. S. security (“Pentagon Distorted ISIS Intel,” by W. J. Hennigan, Daily Press, Newport, VA, Aug. 12, 2016, p. 14) Rogue elements in the U. S. government, especially The White House, the State Department and the Pentagon’s Central Command, don’t seem to be on the side of the American people. Rather, they align with the greedy parasitic politicians who pit males and females and/or the Black and the White populations against one another.

On the other hand, the five distinctly vibrant, strong-willed and purposeful female athletes, the fabulous, demonstrated a quality of grit and character that should serve as the standard for president and Commander-in-Chief of the U. S., rather than a female person whose only qualification is gender. All of the Fabulous 5 are self-empowered, not gender-dependent.

But lucky for the people, our true and only leader ultimately, is the natural cosmological force of our multiverse of unlimited universes that made the celestial order that, in turn, produced complex human life and a reality of local consciousness on evolutionary planes available to what were once one-celled underwater life forms that over millions of years generated into a human homo sapien species from fish and ape forms – like “Lucy,” the first of an ancient female gender of the spiritual origin or essence, or genie, as the Ancient Masters of early Black civilizations called the spiritual force of life that energizes humanity today. 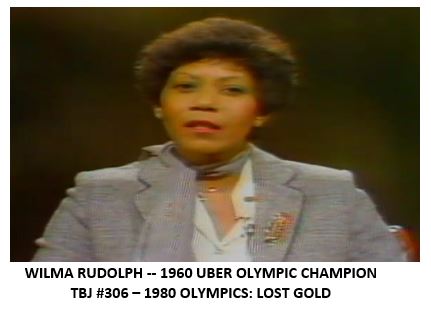 The “ALL” of our human species, as the Ancient Masters called this natural force, manifested “Herself” again at the 2016 Rio Olympics this week. These 2016 heroines, all historically Black, are described today at our level of a post U. S. slavery consciousness as two women of African origin, one Hispanic and two that Europeans have re-classified Caucasian.

For a list of the video lessons from Tony Brown’s Home Schooling Collection of 1,000 historic titles from Tony Brown’s Journal, America’s #1 Black-Affairs TV Series on National Television for 40 years, visit www.TonyBrownsJournal.com and download the FREE catalog, then subscribe (www.TonyBrownsJournal.com/purchase) and have the access to the entire iconic collection of 1,000 videos streamed to your home or office computer or mobile device 24-7 anywhere in the world an Internet connection is available. The time is now.

Let TonyBrownsJournal.com do the teaching with streamed videos in your home, your office or on your mobile device for a true Black history education. For more information click here: www.tonybrownsjournal.com/homeschooling.

Now is the time to transform that kind of knowledge into material wealth by becoming an Affiliate of the TonyBrownsJournal Affiliate Program (click www.TonyBrownsJournal.com/selfempowerment).  With the Learn and Earn Affiliate Program, anyone can objectively decide how much time each week he or she is willing to commit to the program in order to earn their desired income and a retirement income. Within the Learn and Earn Program, I have outlined steps to success and I will continue to share my knowledge and resources with you.