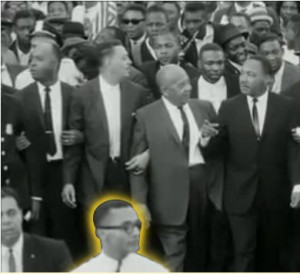 I would be a liar if I told you that all we need to stop the endless march of racism in America is another protest civil rights movement because the lack of a transformation into an inclusive machine is at the core of racism gaps in education and economics. Like the one I experienced as a young man on the streets of Detroit circa 1960s. We have been there, done that and benefitted greatly from it. Case closed.

For example, most of the people in the 1963 picture above are either inactive or on the other side – and they must be replaced if the light of freedom is to be re-lit in Detroit and across the nation with a new vision -- if America is to avoid imminent destruction from within its own citizenry.

The frequency of recent public events, pitting Whites against Blacks en masse, e. g., Paula Deen, the NFL, the NBA, etc. are manifestations of not only the continued growth of the idea of suppressing people of color (albeit in a more subtle form) but it has tightened its grip on the very structure and way of life of all Americans.

The battle against the forces of darkness is no where near being won and the people in power do not have freedom and justice for all Americans as their main objective. We, the people, must rise up again as we did on the streets of Detroit in 1963 with MLK in peace and noble purpose, unified across the very lines of race, ethnicity and selfishness that have been used to divide us and satisfy the goal of a very small group.  This problem is not going to disappear unless the American people act in unity because it has been structurally/institutionally built into the fabric of our society and the innocent are also punished.  No one can independently avoid its devastation.  We have to work together.

This predicament requires a transformation of the civil rights movement into a viable institution that is strongly rooted in sound economic principles and marketing strategies. However, the will to complete this task is missing. A practical solution to this race-based dilemma is shared in my upcoming blog: “How To Solve The Race Problem.”

JOIN US IN THE FIGHT AGAINST RACISM

Watch www.tonybrownsjournal.com/tony-browns-essay-on-martin-luther-king for my personal views on the Detroit March.

Click http://affiliate.tonybrownsjournal.com/affiliates/ for FREE information on How To Help Each Other Become Economically Self-Empowered.