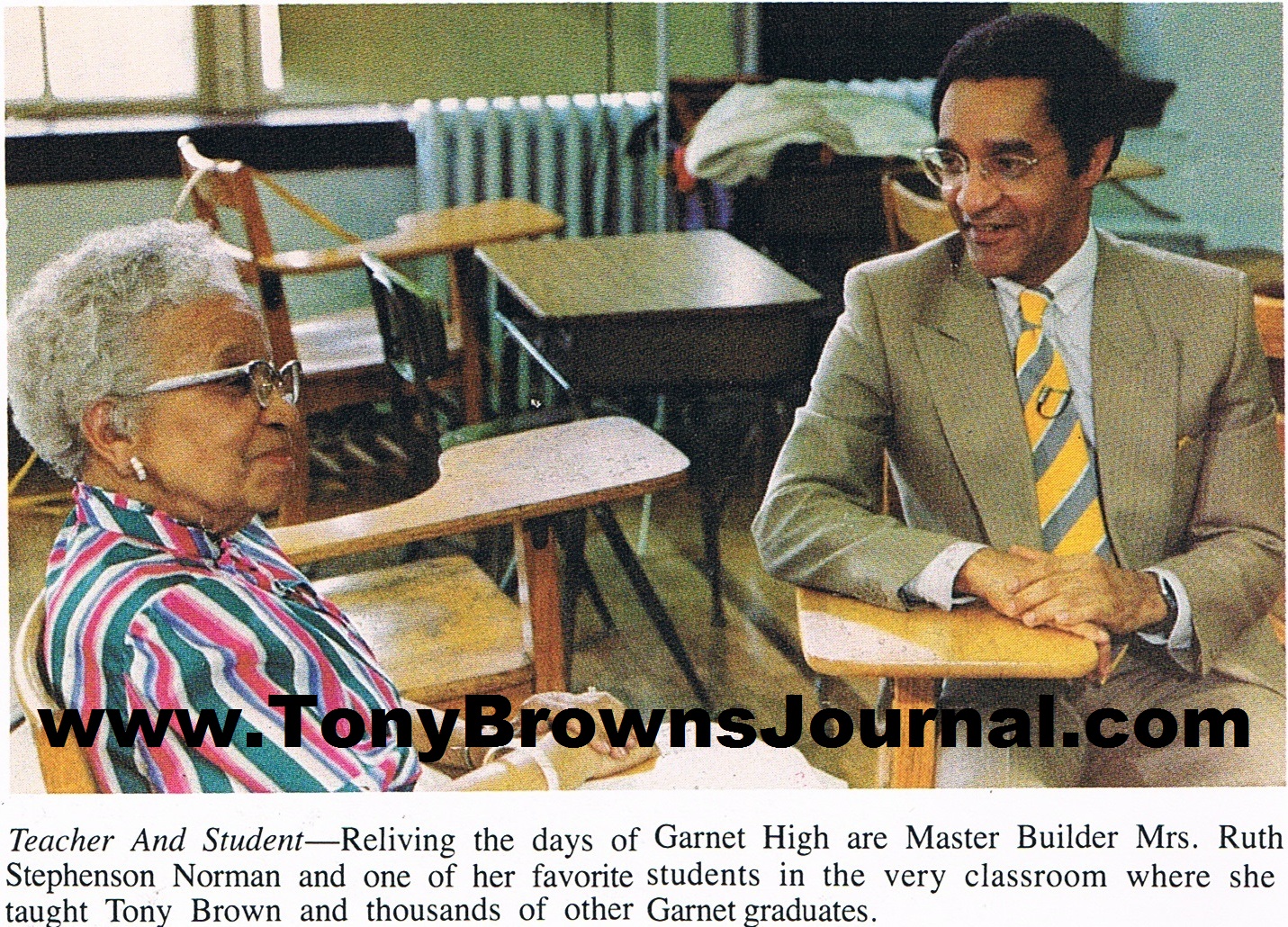 I was born Black and not into the middle class, but I was never taught that I was poor; I never lived with my father, but I was never taught that that made me any less of a man. I went to all-Black schools in a segregated system, but I never learned that we were inferior because we were together. We were proud and motivated to learn. My beautiful Black teachers were the gods of my learning universe.

I graduated from the famous all-Black Garnet High School in Charleston, West Virginia. My education at this accredited place of reasoning and logic placed me near the top when I later applied for admission went to a White college and graduate school in the North, Wayne State University in Detroit. I never could have done these things if I couldn't get along with other racial groups. And I've never been asked how well I get along with Whites. But I'm consistently tested for my reading, writing and computing skills.

I was prepared by Black people in a Black environment to get along with and respect other people, races and cultures. But you can only respect others when you respect yourself and my Black teachers and parents taught me that first.

Racism does not expect quality, competence or performance from Blacks. The White supremacy philosophy, also shared by some Blacks, is born out of an ignorance of the history of Black Americans which expresses a tradition of excellence. And I wish the school systems would take a page out of Black history and go back to expecting excellence from Black and White students.

Jacqueline Howard wrote a comment on my Facebook page asking, “How can I get access to your Take Back Your Mind With Home Schooling Service for Black history?”

Jacqueline Howard, you can start home schooling in your neighborhood and teach the children and your friends Black history by using, for example, “The Black Eagles,” a 4-part series (#605, #606, #607 and #608) and/or the 1,000 Black history videos from the Tony Brown’s Journal Video and Film collection streamed to your home computer or on your mobile device. That will avoid depending exclusively on the school system. And if you are fearful of having Black history material in your home, ask yourself why. Do you like the answer?

TonyBrownsJournal.com can stream nearly 1,000 Black history video lessons into your home or office computer or your mobile device 24/7, day or night. These streamed videos (lessons) are vital to the development of every child of every part of the human family, which descended from the ancient land now called Africa, where everyone was Black.

Parents, you must take matters into your own hands. All you have to do is:

EACH ONE TEACH ONE ... All you have to do is click here (www.tonybrownsjournal.com/purchase) and subscribe ($29.99 per mo.) to the Tony Brown’s Journal Video and Film collection with its nearly 1,000 videos which have been described by one archivist as “the most complete and thoughtful record of African-American opinion.” You and your family can view the iconic and historic episodes anytime you want, whenever you want, day or night to show and guide your family into a broader knowledge of the contributions that Black Americans have made to defend America, build her economy and all of her institutions.

Many are contented to believe that a quality education is impossible to achieve without middle-class Whites and their resources and an isolation from the White culture. They point to the low scores of Blacks on tests that measure the skills required by the dominant White culture. But while over 40 percent of all Black students attend schools with a Black population in excess of 80 percent, by the late 1970s test results showed that poor and minority students made the biggest gains in reading and arithmetic.

There are obviously too few Blacks in White schools to credit that achievement to desegregation. What is usually and obviously overlooked is the very strong commitment that Black parents have to education. Which is one reason that the number of Black students attending private schools has doubled. Studies show that going to school with Whites is no guarantee of success; in some cases, it may even be a hindrance.  In my case, at Garnet High School, success was only guaranteed by excellence, and Whites were irrelevant because there were none.

Even when Blacks and Whites attend the same schools, the quality of the education they receive is often different. One reason for this in today’s education system is that many Blacks have comfortably adopted a passive attitude toward self-reliance and in many ways are hostile to the idea of academic excellence.

It has been suggested that the psychological damage that results from being expected to perform poorly, combined with being routed into less-rigorous courses of study, including the disproportionate placement of Blacks in programs for the “handicapped,” does significant damage in stifling the potential of Black students.”

Blacks are left with the sole choice of establishing an informal structure of education for their children or surrender to the fate perishing at the hands of an unskilled and underemployed and highly unemployable subset with no hope for future achievement.

We have examples that dismiss race as the variable in a quality education.  The most dramatic example of the quiet social revolution in America is the success of poor, urban, Black children in independent Black schools: Marva Collins' West Side Preparatory School and Hannibal Afrik's Shule Ya Watoto (School for Children) in Chicago; the Sister Clara Muhammad Schools of the American Muslim Mission; and the Lower East Side International Community School in New York City.

As far back as 1787, Blacks in New York recognized the need for educational self- help when they organized the African Free School, where Henry Highland Garnett would later study in 1831. It was the first free public school of any kind and became a prototype for that city's public school system which was established in 1834.

Henry Highland Garnett was born a slave in New Market, Maryland, in the year 1815. He was pure-blooded Black of the warrior Mandingo tribe (Sudan Africa). When Henry was ten years of age, he and his parents escaped from slavery and settled in New York City. Reverend Garnett, a leader of the abolitionist movement, published the Clarion—a weekly periodical advocating the abolition of slavery. In 1850-53 he lectured in Great Britain on the evils of slavery.

A pastor and political activist, Garnett advocated violence to end slavery if peaceful methods failed. In a fiery speech to the Free Colored People Convention in Buffalo in 1843, entitled, "An Address To Slaves of The United States," he issued his famous call to rebellion which attracted national attention and failed by only one vote of being adopted by the Convention.

Garnet High School, where I graduated in 1951, was founded in Charleston, West Virginia in 1892 and subsequently graduated 2,438 students before its final commencement on May 25, 1956. With integration, Garnet lost its Black identity and its name. The graduates received a high school education that was second to none in the country. Despite racial separation, over 80% graduated to college level, including Oxford University in London, the Sorbonne in Paris, Harvard and a plethora of Black colleges, etc.

That was back in the day (“now emerging as “the good old days”). The new norm will require the past successes and methods. For Black people, that means more schools like: Marva Collins' West Side Preparatory School and Hannibal Afrik's Shule Ya Watoto (School for Children) in Chicago; the Sister Clara Muhammad Schools of the American Muslim Mission; and the Lower East Side International Community School in New York City. Short, of these, Blacks need home schooling.

We need to return to self-empowerment with home schooling that is adopted to a technological world and an electronic curriculum of courses (like the Tony Brown’s Journal collection) which can be used in the home of the average person to lead family and group discussions in a new field of knowledge that can revive Black work skills.