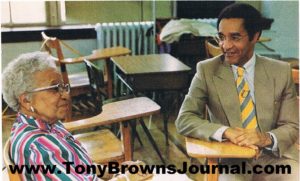 MON., OCT. 1 – TBJ #631 -- Mrs. Norman, We Love You: Garnet High School in Charleston, WV was Tony Brown’s high school. It was one of the most academically rigorous high schools in the nation and, as a result, in 1951, his freshman entrance exam to Wayne State University in Detroit was waived because of Garnet’s outstanding academic record. The fact that Garnet was all-Black by laws that ironically resulted in an all-Black faculty that possessed advanced college degrees from a variety of prestigious universities that included The Sorbonne in Paris and many of the most distinguished Black colleges and White universities in the U. S.  On this edition, his English teacher, Mrs. Ruth S. Norman, and the all-Black school’s standard of academic excellence and character building are profiled.  Garnet High School was named after Henry Highland Garnett, a former slave from the militant Mandingo tribe in Africa and later Jamaica, during America’s segregated era. 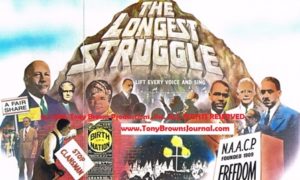 THE HISTORY OF THE NAACP ... This is the story of Black America and the NAACP’s 75-year march to freedom and justice. This compelling 4-part docu-drama intertwines rare footage and documents seldom seen in modern times and dramatic reenactments of historic figures. This absorbing chronicle of the struggle for first-class citizenship is truly Black America’s most powerful march.

TUES., OCT. 2 – TBJ #704 -- Reign of Terror – Part 1 – The Civil War was followed by a brief period of about 10 years (1867 – 1877) called Black Reconstruction when the racial camaraderie between Blacks and Whites, in some isolated parts of the South, was so intimate that northern carpetbaggers and abolitionists found it distasteful.  Subsequently, the Ku Klux Klan and other secret hate groups were born. Their tools: terror, murder and intimidation – and a Reign of Terror.

FRI., OCT. 5 – TBJ #707 -- 75-Year March -- Part 4 -- The march began in 1909, when a small group of White citizens, appalled by the injustices suffered by some Americans solely because of their race, formed the National Association For The Advancement of Colored People (NAACP). The NAACP emerged as the largest and most influential civil rights organization in the country until its decline. Its accomplishments in school desegregation, prison reform, open housing, equal employment and voter registration have been extraordinary.