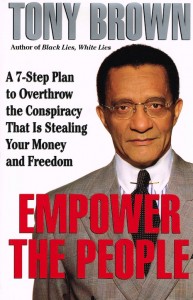 The National Association of Black Journalists (NABJ) was pleased to announce its 2015-2016 Hall of Fame Inductees, recipients of the highest recognition given by the organization. The induction ceremony took place at the Marriott Wardman Park in Washington, DC on Friday, August 5, 2016 as part of NABJ’s 40th Anniversary Gala.

His first media position was with the Detroit edition of the venerable national Pittsburgh Courier newspaper chain, a foundation cornerstone of the Black Press, as a reporter and columnist in the early 1960s.

This widely recognized out-of-the-box thinker was inducted into the National Academy of Television Arts & Sciences' prestigious Silver Circle in 2002. With this honor, he joined other television icons such as Walter Cronkite who "have made enduring contributions to the vitality of the television industry and set the highest standards of achievement for all to emulate." In 1985 Tony Brown received the NAACP Image Special Award and in 1991, he received a Black Emmy Award for "distinguished and outstanding achievement on behalf of African-Americans in the television industry." This historically distinguished journalist and best-selling author is currently working on his fourth and latest book.

"NABJ was honored to recognize this exemplary group of African-American journalists whose work has broken-barriers and reached the highest standards in journalism," said NABJ Executive Director Darryl Matthews, Sr. The induction ceremony took place at the Marriott Wardman Park in Washington, DC on Friday, August 5, 2016 as part of NABJ's 40th Anniversary Gala.

To this day, a robust and healthy Tony Brown continues his ground-breaking journalism with his rare collection of 1,000 TV programs from his 40-year award-winning national television series, which is available at wvvw.TonvBrownsJournal.com. Included in this historical collection is one feature movie, "The White Girl," that he produced, financed and directed as an independent feature film.

In the area of civil rights, Tony Brown coordinated the largest civil rights march in U. S. history on June 23, 1963 in Detroit, MI. It was led by Martin Luther King, Jr. and drew a record setting 500,000 people. This was the first time that Dr. King delivered his famous I Have A Dream speech and 66 days before he delivered the same stirring speech in Washington, DC, August 28, 1963.

"As a university dean emeritus of a journalism school, I consider viewing and studying the content of this historic collection to be the equivalent of an academic Ph. D. degree in Black History and Black Affairs," said Tony Brown.

Institutions can license the entire iconic collection that has been described by one archivist as "the most complete and thoughtful record of African-American opinion." Contact Tony Brown at mail@tbol.net.