Only Black Self-Empowerment Will Upend Racism

SELF-EMPOWERMENT: FROM BOOKER T. WASHINGTON TO MARCUS GARVEY TO ELIJAH MUMAMMED TO MARTIN LUTHER KING TO NOTHING.

WHY  THE WORLD NEEDS A KNOWLEDGE OF BLACK CIVILIZATION

Moderated by Tony Brown, Dean Emeritus and Professor of Journalism and Communications at a top-rated Historically Black University and was also the producer and host of the #1-Rated Black-Affairs National TV Series, Tony Brown’s Journal, for 40 years on both PBS and commercial TV syndication. This Emmy-award winning series won acclaim as “the most complete and thoughtful record of African-American opinion.” 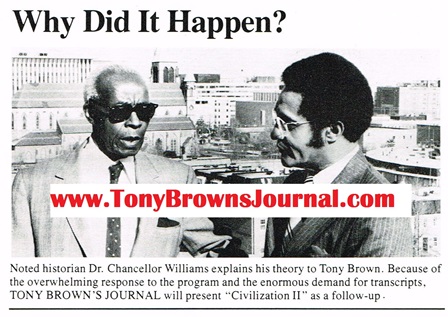 This webinar will begin with the promise and vision that Dr. Chancellor Williams left us with in his book “The Destruction of Black Civilization”: “This work begins where the history of the Blacks began, in Egypt (Northern Ethiopia) and the Sudan (Southern Ethiopia). Thus, at the very outset, I clash head-on with the Caucasian version of African history… . I have generally reached different conclusions than theirs, and from the same body of facts.”

You can attend the webinar lecture on Dr. Chancellor Williams’ self-empowerment classic on Thursday, February 25 from 1 P. M. – 2 P. M. (EST) without leaving the comfort and privacy of your home or office. Your entire family can also benefit from this unique learning/discussion experience (each one, teach one) on your computer or mobile device because it will be streamed live anywhere in the world there is an Internet connection. Once you register ($29.95 fee), you will receive a personal link to join the webinar. (Note: This link should not be shared with others; it is unique to you). Register NOW because space is limited.

My February 25, 2016 Black History Month lecture is packed with vital information that you can use to overcome the harmful distortions of the factual history of the ancestors of African Americans in ancient civilizations and how that has impacted immature African American youth’s ability to tap into their mental potential and avoid adopting clinically anti-social and self-destructive behavior that fosters neurotic patterns.

Without any anti-White or revenge motive, I propose a new self-empowerment focus among Blacks that could trigger U. S. national prosperity and African-American advancement simultaneously.

Marcus Garvey was a key player in Phase I of the Black self-empowerment movements. This phase was later resurrected by Dr. Martin Luther King, Jr. in the civil rights phase that Dr. King used and led so brilliantly. It fit the times. I know because I was a part of it when I coordinated a march that he led – 500,000 freedom-hungry Black people and hardly a White face: the largest civil rights march in U. S. history. It was held 66 days before the much-publicized 1963 March On Washington that 250,000 people attended and Detroit was the first place that Dr. Martin Luther King delivered his famous “I Have A Dream” speech. I had spent months coordinating this epic event, shortly after receiving my Master’s Degree in Psychiatric Social Work from Wayne State University in Detroit.

However, today in an era of high-technology and social media, prudent updates to this successful old school strategy and the addition of a monetary incentive can be wildly successful. In my case, I’m starting with advanced social media technology and an Internet platform that features webinar structures as a new beginning to achieve equality of opportunity and income for all who participate. (Use this blog for talking points to get you started at the webinar.)

A first step for you today is my worldwide webinar online event on Thursday, February 25 at 1PM (EST). Click here (https://attendee.gotowebinar.com/register/3116272511558686978)  to register for this first online event honoring famed historian Chancellor Williams and using his famous book, “The Destruction of Black Civilization,” as a teaching tool to guide people out of the darkness of racist brain implants and the centuries of slavery indoctrination of dependency. This duplicitous, although mostly benign, indoctrination of widespread prejudice and institutional bias, based on skin color, continues to this day. Socialist government dependency in the U. S. offers crony partisan political solutions that leave modern Blacks even more economically dependent, albeit to a new slave master, because the prevailing mindset is that African ancestry disqualifies humans from the pursuit of excellence and the accumulation of wealth, mental and material.

BACK TO BLACK IN HISTORY

Since Dr. Chancellor Williams’ time and his transition in 1992, some African Americans have enjoyed great accomplishments, even outside of sports and entertainment, but most have also stubbornly held on to some of the slavery character traits and neurotic personality disorders of self-destruction that were imposed on their culture during the slavery era, such as a lack of confidence and trust in their own people. The result is today’s low expectations and poor performance.

“The Destruction of Black Civilization” is one of the seminal books on this subject. Yet the author’s proposed solutions continue to be largely ignored. At the root of this dilemma – fortunately not a problem – because a dilemma can be solved/overcome with a viable, rational self-empowerment strategy, especially if it is an economic dilemma, such as the present one impacting African Americans.

It is impossible to effectively respond to Dr. Chancellor Williams with words of philosophical altruism and lies and it is historically irrational to ignore his call to self-reliance action. Moreover, ancestral pride in the Black men and Black women of the past who made today’s civilized world possible for humanity and viable for all living beings is an irrefutable, historical fact. We are indeed, as another disregarded Black historian, J. A. Rogers, wrote, “Africa’s Gift to America.” Unfortunately, one of the prominent scholarly ancestors of this message, Chancellor Williams, has also been pushed into a back corner of historical oblivion that is shamefully reserved for many great scholars, Black and White, of honor and integrity.

That disrespect is about to end.