Donald J. Trump, president-elect of the United States, has publicly offered a deal to Black Americans to become partners with the federal government in rebuilding the infrastructure, buildings and highways and laying the foundation for business development of the nation’s inner cities.

This would be an enormous contribution to the nation’s wealth and fortune potential for education and economic development among the nation’s Black population and for the development of an economic class of Black entrepreneurs – on steroids, beginning with home-based businesses as a foundation.

Specifically, it offers a rare path to self-empowerment by providing a way to help Black communities become better skilled for the new technology-demands of the economy and for the success in education programs and activities that lead to the newly-required skill sets. This direction away from multi-layered social welfare toward individual development and upward mobility skills is the inherent gift of self-empowerment, along with the higher wages that accompany that path of advancement.

Despite the American past history of discrimination and segregation of their gene pool, African Americans, through their own grit, institutions, history and genius have succeeded in developing the 10th richest gross domestic product or economy in the entire world, despite the systemic and oppressive racism that began at the top of the federal government.

Now an evolved federal structure and a more evolved White population, and most recently, a populist President Trump, comes the offer to directly support and relieve the Black population of the onerous burden of the institutional pattern of racism that former federal administrations forcefully imposed on the Black population.

The new Trump offer appears to satisfy the mission goals of those African Americans who desperately need a hand-up to move into the arena of an education that provides skills, experience and an economic system that will reward those skills with better incomes and an opportunity society.

This self-empowerment approach that I have been promoting all of my adult life will not leave any American behind because it helps all American citizens gain more income and skilled jobs and fewer Americans who are forced to beg the government for social dependency welfare programs.

However, most America would benefit from this proposal from a President Trump to directly rebuild the blighted core of the inner cities. It would also inspire all groups to achieve greater benefits and more access to capital, specifically higher wages and better access to skilled technical education. That’s the deal, succinctly.

African Americans, the new president of the United States has offered you a deal, read my response below and see if you agree.

“There is a tide in the affairs of men, which taken at the flood, leads on to fortune. Omitted, all the voyage of their life is bound in shallows and in miseries. On such a full sea are we now afloat. And we must take the current when it serves, or lose our ventures.”

I learned that quote and the life lesson behind it when I played the role of Cassius in William Shakespeare’s play, “Julius Caesar,” during my years at the all-Black Garnet High School in Charleston, West Virginia.

The president-elect’s offer just made Shakespeare relevant again in my life. In short, Black America must finally make a choice: continued status as a financially-dependent, non-competitive caste in a free-market economic system or succumb to state welfare and partisan politics as a means to maintain confrontational racism and divide Blacks and Whites. Self-help (self-empowerment) is a requirement  for success in a free-market economy. In my opinion, if we choose the self-empowerment model, we will realize the path to economic and social equality. Political equality is the result of the correct choice of economic systems: Begging is a free card to jail and working is an earned guarantee of success.

Marcus Mosiah Garvey succinctly spelled it out: “Rise up, you mighty people; accomplish what you will.” If you believe in Marcus Garvey’s self-help message from back in the 20s, your time has come. Self Empowerment is now.

My detailed solution to the Black Predicament is “The 7-Step Plan To Making ‘New' Money.” 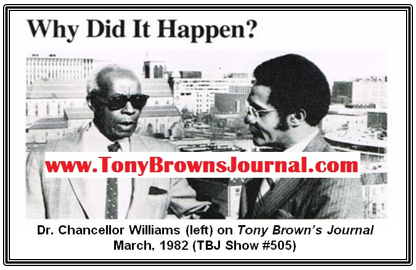