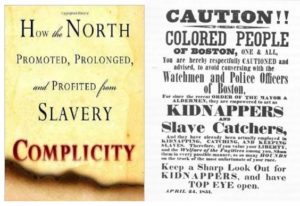 Slavery could not have become institutionalized in the South without the active participation of northerners in the United States. As the authors argue, the state of Connecticut, and the entire nation, were complicit. This “complicity” took many forms – ownership of slaves, promotion and funding of the slave trade and active involvement in it, support for fugitive slave laws, use of “science” to defend notions of white supremacy, and even the support for the ivory trade, with its disastrous impact on African nations -- an impact that lasted well into the 20th century.

TBJ #2902 -- Slavery’s Biggest Secret – Part 1: COMPLICITY: How the North Promoted, Prolonged, and Profited from Slavery examines what its White authors view as “a shameful and well-kept secret” – the critical role played by the North in supporting and profiting from slavery, from colonial times until, and even after the Civil War.

As a result, the authors argue, many Americans emerge from school believing that the North and its citizens watched innocently as the institution of slavery took root and thrived across the Mason-Dixon line, and finally decided to go to war to hold the nation together and ultimately end the evil institution on which the South depended.

“GOD DOESN’T LIKE UGLY, BUT HE LOVES ME”   Social change marches forward as Elon Musk, the richest human sentient in the world, single-handedly reminded the world of the true meaning and essence of free speech on “Mornings with Maria Bartiromo” on Fox Business TV (April 15, 2022).

Musk has successfully avoided the ultimate pitfall of being too rich with money while remaining ignorant of common sense. As a result, his popularity has grown exponentially and avoids the common political barrier of biased partisanship.

My audience on TonyBrownsJournal.com, through its responses to my recent blog (“My Birthday Gift To You On The 89th Anniversary of My Miracle ‘Salutes Your Potential To Grow’”), is the perfect example of the thought and behavior that exemplifies Elon Musk, because both principles demonstrate truth at its best.

Therefore, the following blog, “Slavery’s Biggest Secret,” is dedicated to the brilliant mind of Elon Musk, a native of South Africa and a Libertarian with a compelling and visionary view that could potentially, perhaps, give us the most compelling period in human history.

TBJ #2203 – The Shackled Immigrants:  An exploratory examination of how slavery and racism impacted the social and economic progress of African-Americans as compared to other immigrant groups.