As I promised I would clarify my position after Trump won.  Here are the facts I promised you. I wrote on November 3: “Tony Brown Predicts That Donald Trump Will Be Elected the 45th President of The United States: ‘You Can Dance With Me Or Not, But I’m Going To Dance And I’m Going To Vote For The Best Person I Know To Be Our Next President.’”

Garyon Nettles responded: “What you smoking? LOL.”  Tony Brown responded: “Success. You should try it. LOL”

Many of my Facebook friends joined Garyon Nettles and excoriated me last week for even suggesting in my blog (“A New Deal” For Black America: www.tonybrownsjournal.com/blog/a-new-deal-for-black-america) that Donald Trump might win the presidency on November 8.  In response, I further predicted that he would win the presidency outright on Tuesday, November 8, 2016 by 5 to 7 points. And I now emphatically state, once again, that the truth is more important to me than being Black, being American or even being alive. So I say to all of the naysayers, and to the world, that the truth is the only power I seek.

I met a similar resistance from some so-called civil rights leaders when I coordinated the largest civil rights march in the history of the United States, the “Walk To Freedom With Martin Luther King, Jr. March” in Detroit in 1963, and in 1980 when I organized and personally sponsored the first Black College Day March in D. C. to stop the White liberal NAACP Legal Defense Fund, part of the Hillary Clinton alliance, from closing Black colleges.  I won then and I am convinced now that I will be on the winning side when Donald Trump leads this great nation to its destiny of fulfilling its promises to all people, despite his past foibles, if he sticks to his campaign promises. 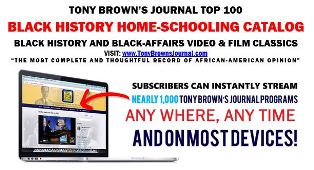 Home Schooling Black History. Let TonyBrownsJournal.com do the teaching with 1,000 streamed videos in your home, your office or on your mobile device for a true Black history education. For more information, click here: www.TonyBrownsJournal.com/homeschooling

Throw as many rocks at me as you wish; the truth of reality does not need a partisan sanction nor does it seek a color preference. Like I told the girl who rejected me, “If you don’t want to dance with me, I’ll find someone who will. But I’m going to dance.”

Other friends of my Facebook page offered support for my position:

Gerald Perry.  Anybody who don’t care for Tony Brown is missing out on a truly freed brother in mind, body and soul. First brother to really school me on what the Congressional Black Caucus was really about.

Kem Unity.  I hope Trump wins because a wake up and shake up is needed. Neither party will address Black issues directly. That " Minority" talk is cover for helping everyone except Blacks and Especially the Black male and Traditional Black family.

Darrell Batiste.  I've read two of Tony Brown's books, 'Black Lies, White Lies' and 'Empower the People'. I've always found him to be knowledgeable and sagacious. And, I happen to agree with Mr. Brown that Donald Trump will win this election.

Gabrielle Toupence. ....To God's Ears. I miss listening to you Tony on WLS in Chicago all those years ago.

Thomas Sanders Jr.  TONY BROWN HAS BEEN MAKING PREDICTIONS FOR ALONG TIME AND HAS A GOOD TRACK RECORD.

Loretta King Sochor. You better vote for Miss Hillary or Obama will be "insulted", and after all the things he has done for you: lowest employment in 40 years, home ownership for Black families has not been this low since 1950, and since Obama has been in office, the high school graduation rate for Black students is 3 times lower. Can't have you get all "uppity" and leave the democrat plantation now. They are so sure of your vote, the democrats call you their "Black voting block", code for "house boy", as somebody called Tony Brown for having the guts to step off that plantation. Sadly, they don't even need to work for your vote. Government programs, welfare, food stamps, housing......the new slave master, and, not only Black Americans have slapped on those chains.  Does it scare y’all that Brown is a free thinker, independent of that "Black voting block" the democrats have come to depend on? Or is it the nerve he has to jump that plantation? You don't have to follow him, stay, just let him think as a free man, and you can pretend he is nothing more than "an uppity negro" if it makes you feel better plowing o'l Miss Hillary's field.

Loretta King Sochor.  Do you need the information spoon fed to you? I find it such a tragedy, why don't you use the freedom you have to research and fill your brain with information and knowledge. Wow, I have never seen such vitriol and anguish towards a Black man who thinks outside of the "Black democratic voting block" the democrats have come to expect and don't even need to work for, as I have seen here. Let me ask you what has Mr. Obama, his administration, and his policies, or any democrat for that matter, done for you and the Black community? Besides becoming the new slave master under the cloak of welfare, food stamps, and the vast social programs to insure your dependency on government. Black employment is at a 40 year all-time low. Home ownership for Black families is lower than pre 1950, and the rate of high school graduations in the Black community is 3 times lower than when Obama took office. Intact families in the Black community is less than 20 percent. Tony Brown receives your scorn because he had the audacity to jump the plantation once he started thinking like a free man, not sit on old narratives and lap up the democratic propaganda.

Jeffery C. Robinson. So all of you are saying Hillary will be better for Black communities? The same person who helped with the mass incarceration of young Black men. The same person that called young Black men super-predators and said they needed to be brought to heel? You think she's going to do something? Democrats have been lying to Black people since the late 60's and we've bought it, how they are going to do this or that for us, yet we've gotten nothing. I've worked for what I have and it's not been easy, what about you? So you want to let them lie some more and not have those promises fulfilled. Or would you take a chance that trump might do what he says. I personally don't care, but think long and hard about it.

Bridgette Miller.  People support you, so long as you say what they wanna hear, it seems. Typical. Thank you for sharing this article and for sharing your vote, it sucks our own people are treating you bad for merely having a different opinion.

Bridgette Miller.  I am reading some of these nasty, terrible, rude, hateful, and disrespectful comments aimed towards a civil rights icon like you ...and it's disgusting the amount of hatred. But I guess some people are ok with treating each other badly.

Paula Clark.  Well Mr. Brown, I hope you are right when you say Mr. Trump will fulfill his promises to all people should he win the presidency. Trouble is I haven't heard any promises he has made to African Americans. Enlighten me.

Willie Humphries. In the I 80's I read the Book .. White Lies and Black Lies, Tony wrote... What I got from it.. Tony was tired of the ignorance of Black people. President will not resolve Black matters. It is going to take the working class man and woman to build their own. And how will that happen? By going Black banking. make our Black dollar more available to our hands to build our own empires and kingdom's. To all negroes and Blacks and African American. Go Black banking..

Samuel Milledge. Wow. I Always wondered what happened to Mr. Brown. I actually thought he was dead. Though I disagree, I respect his opinion. I have always admired thought a lot of Mr. Brown, and still do. I really hope he is wrong on this call.

Home Schooling Black History. Let TonyBrownsJournal.com do the teaching with 1,000 streamed videos in your home, your office or on your mobile device for a true Black history education. For more information, click here: www.TonyBrownsJournal.com/homeschooling